So Friday night was the opening ceremony for the 2010 Vancouver Olympics, which I didn’t catch because I was too busy getting “crunk” at a Wale concert. *Wale is a Trekky!*

But I’ve been keeping up with the medals, and so far U.S., Korea, Netherlands, Slovakia, and Switzerland have a gold. And the U.S. has the most medals. [Cue big, excessively long, “U.S.A.” chant!]

Vancouver mascots: I’ll give a buck to the first person who can tell me what the fuck these things are supposed to be. They look like Sanrio rejects. For now, I’ll refer to them as Cute Big foot, Tri-horn squirrel, and Skinny Panda.

Olympic events I actually give a shit about: 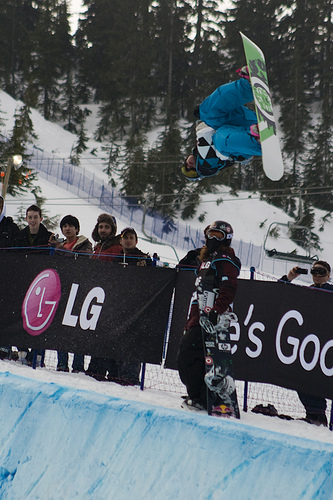 I love watching Snowboarding, even though half the time, all of their tricks look the same to me. But I’m sooo ready to root for Shaun White, aka The Flying Tomato, aka Super Ginger. Or whatever he goes by nowadays. 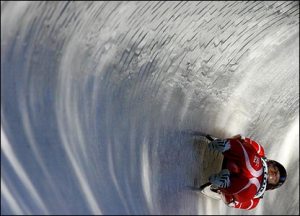 When I was younger, I always used to sit right infront of the TV and pretend I was on the sled with the athlete, swerving in all of those twists and turns. It was like a poor man’s roller coaster ride.

R.I.P Norad Kumaritashvili, the 21-year-old luger from Georgia who tragically died in a course run (authorities said he smashed his head on a pole) on Friday. The Olympics officials said the cause of death was “human error.” Sure, blame the one guy who can’t even defend himself… douchebags.

Okay, now this is an event I hold close to my heart… I mean, not really, but its definitely the sport I know most about, compared to all the others.

My favorite part is the moment right before a jump, because it’s either flight or fail. And it sucks moreso to fall on your ass in skating; you drown in embarrassment, plus you fall on hard, slippery ice. Ouchies.