I’d advise you to read this post, then read this post on how I accidentally ran into Lance Bass and the universe aligned itself perfectly for just a few seconds. Enjoy.

I wanted to chronicle my experience at the Women’s March Los Angeles—not just so I remember it in detail, but to give it the spotlight it deserves. I can name the many reasons why I marched, but here’s a truncated version: for women’s rights, climate change, inclusiveness for the LGBTQ community, and for immigration and embracing the diversity that was supposed to be the blueprint of the United States of America. Yes, walking was liberating, but the march was a moment—we’re in a movement. If we take no action as a constituent, what’s the point?

I started walking to the Palms Metro Station holding my cardboard sign in one hand, and holding Ben’s hand in the other. The Los Angeles sun obliterated all evidence that it rained heavily the day before, allowing us to revel in its rays instead. This was a good sign.

As we approached the station, only a block away from our apartment, my eyes immediately took notice of the huge mass of people already waiting for the Expo line toward downtown Los Angeles. Sprinkled in front of me were a sea of women, men, and children, many holding signs and wearing knitted pussyhats, each in various shades of pink. Caucasian, Hispanic, Asian, African-American, Middle Eastern—it was a scramble of different shades and it felt encouraging.

We joined the excited throng of people waiting to board the Eastbound train toward Los Angeles’s Pershing Square, where the Women’s March Los Angeles would start. Every train that pulled up toward downtown was already crammed with people. So after about 15 minutes of waiting, we copied what others were starting to do and crammed onto the train headed Westbound instead, toward Santa Monica. We figured we would take the 6 stops to Santa Monica in order to ricochet around and inevitably head toward the march—a total of 24 stops. If I were a corny piece of work, I’d say that sometimes you have to go back in order to go forward. (I had to.)

After two stops, each train compartment was already filled to the brim with bodies. I was butt-against-butt with some lady I overheard was a teacher. And oddly enough, I didn’t even really care since I was distracted. I was chatting with a young woman who was wearing a UT cap and windbreaker. She just moved to Los Angeles from Austin and was equally appalled at how much of a liberal bubble us Californians live in compared to most of the nation. People started singing the national anthem in unison, which in other circumstances would seem hokey, but to me felt like a warm hug to my ears—especially since I was knee-deep in a texting battle with my parents.

In short: They didn’t understand why I was marching, and said I should let the new president lead. I was very disappointed. I was very disheartened. Didn’t they understand that the new legislation was stripping away 51% of the United States population’s reproductive rights? Didn’t they care that a racist who bragged about committing sexual harassment/assault and whose team denied climate change was leading our country? Didn’t they care that the “checks and balances” of our democracy was weighing in favor of the NRA? Didn’t they understand how privileged they were as immigrants? Why did they not feel any empathy for the greater good? Everything was bubbling to the surface and I was floored. It got heated and it got personal. So I took a deep breath.

After an hour and a half of being smashed human guacamole, we finally arrived downtown, where we flowed into a crowd of what seemed to be 2,000 or so people—all walking in unison up Grand Avenue toward City Hall. Reports have said it was more like 300,000 people—holy shit! It was beautiful. People were smiling and waving at each other, giving each other reassured looks of solidarity. I walked behind a little half-Asian girl on the shoulders of her dad. “Isn’t this fun?” her mom said. “Yes!” she squealed. I smiled. 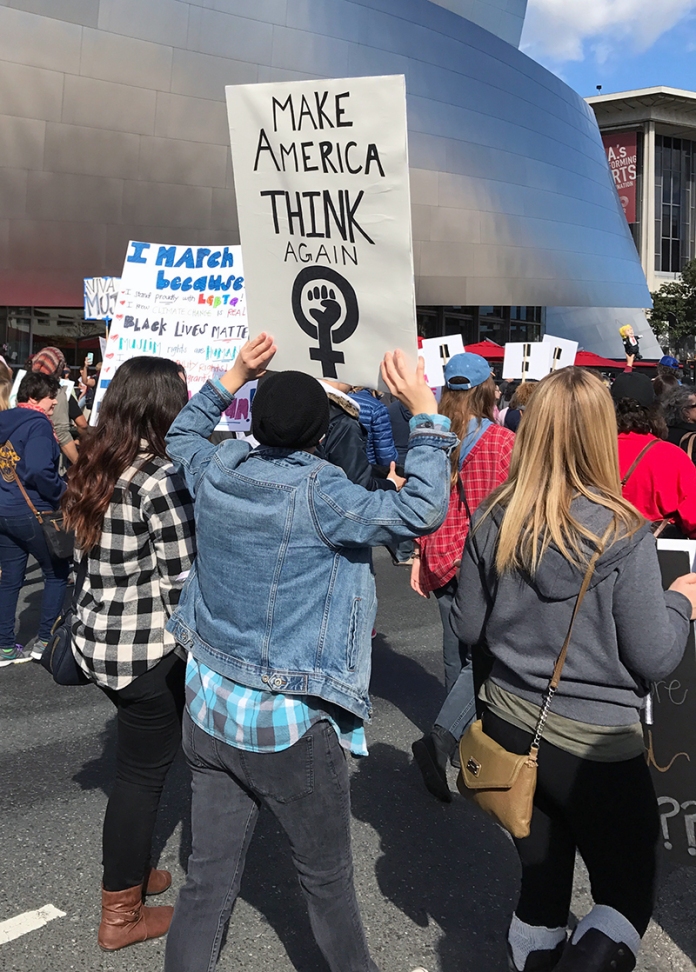 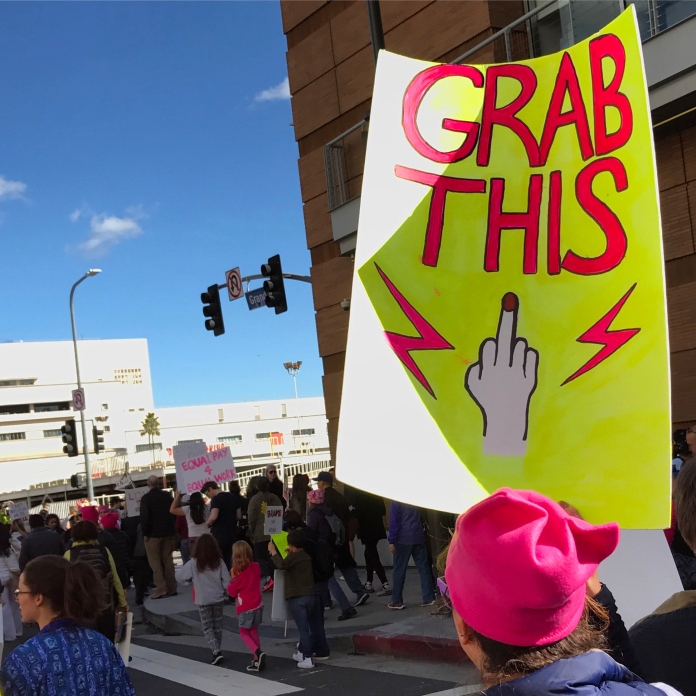 Personal favorite chants from the march:

One of my favorite signs had to be this Mike Pence one (see if you can spot it):

When we finally got to City Hall, we tried to get to the stage area and listen to the amazing lineup of speakers, but were separated by a fence that wrapped a few yards around the stage area. At that point, my never-exercise-ever legs were starting to give out and my mind was very much like, “WTF—how do I get in there?” We decided to cut our losses and walk toward our favorite downtown hotspot/cafeteria/bar Clifton’s, 8 or so blocks away.

On the way there, a few Christian radicals were blasting on a megaphone about how we were all going to hell and that God made women to serve men. Here’s an insider tip: Do not try to troll women at a Women’s March. We will verbally block the hell out of you. We will dance in front of you. We will high five other women, who will then join in. And you have wasted your own, stupid time. 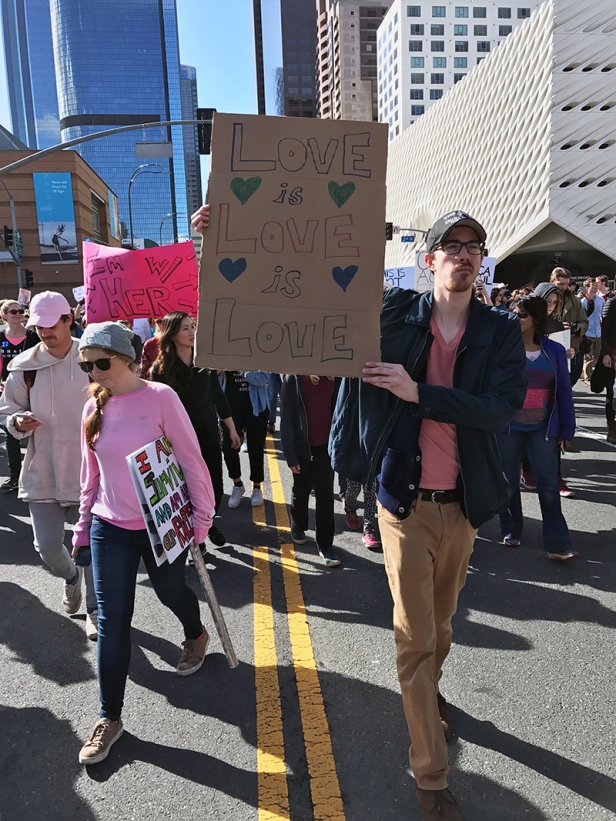 Now it’s been nearly two weeks since the march. And since then, the Executive branch has relinquished federal-funded abortions, reinstated the Global Gag Rule, removing funding for any world health organization that advocates abortion (even safe ones!) and contraceptives for women, has bullied and censored different government agencies, deported and banned immigrants from 7 Muslim countries—even those who legally received their green card, reinstated the Dakota pipeline, and started pulling the threads out of the Affordable Care Act.

God, did I forget anything? Oh yeah, ALL OF THIS SHIT. (PS WATCH THAT VIDEO NOW.)

Honestly, I feel overwhelmed. Again, I live in an already liberal atmosphere (I mean, our mayor sponsors free advocacy training sessions), so what impact do I have on my local lawmakers? I’m not sure, but it’s still our civic duty to voice our concerns and make sure we’re heard. A few tips I gathered from this LA Mag article on fighting for equality:

While I’m hoping you will research and vote in your upcoming local elections—search for your registrar and county clerk’s office!—and I’ll see ya’ll in 2018 when we take back the Senate!

2 thoughts on “Why I Marched and What Comes Next”