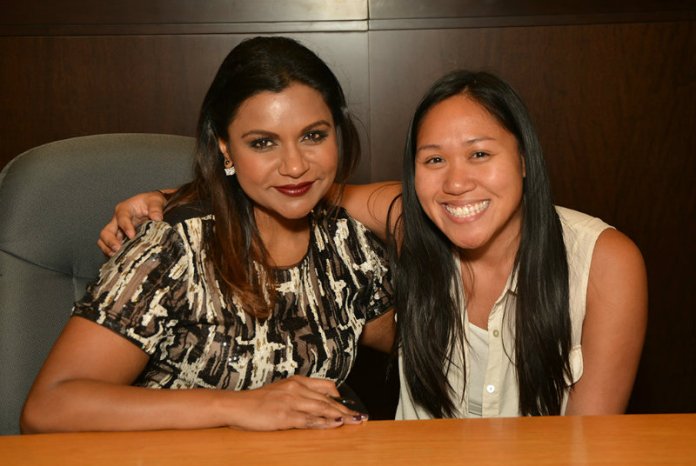 This is what I look like when I have had 2.5 hours of sleep and am swimming in instant regret.

You know that feeling when you wait at least a total of six hours in one day for the opportunity to meet Mindy Kaling at her new book signing, and then you act like a complete dazed idiot because you’re running on 2.5 hours of sleep? I do.

Earlier this week, my friend and I planned on going to Mindy’s book signing at the The Grove’s Barnes and Noble. I had already bought Mindy’s new book, Why Not Me, on Amazon because I’m a Prime addict and because I was so excited to read it! I didn’t read it. Then Barnes and Noble was all like “YOU SHALL NOT MEET MINDY UNLESS YOU’VE GOT B&N BOOK PURCHASING PROOF REALNESS!” And I was like FUCK. Okay. So we planned on getting to B&N at 7:15 a.m. to try to buy another copy of her book in order to get wristbands at 9:00 a.m., since you needed a wristband to go to this signing. I immediately said to myself, “I’ve lived through Comic-Con three times already–easy peasy danycat deezy.”

Rewind to earlier this week: my boyfriend hits his head on a frozen-food section door. And the day before what I’m now referring to as “SHUT UP, MELANIE” Day, it’s not improving. We head over to the ER and stay there ’til around 2:30 in the morning and he’s cured with the help of a little friend named Tylenol. 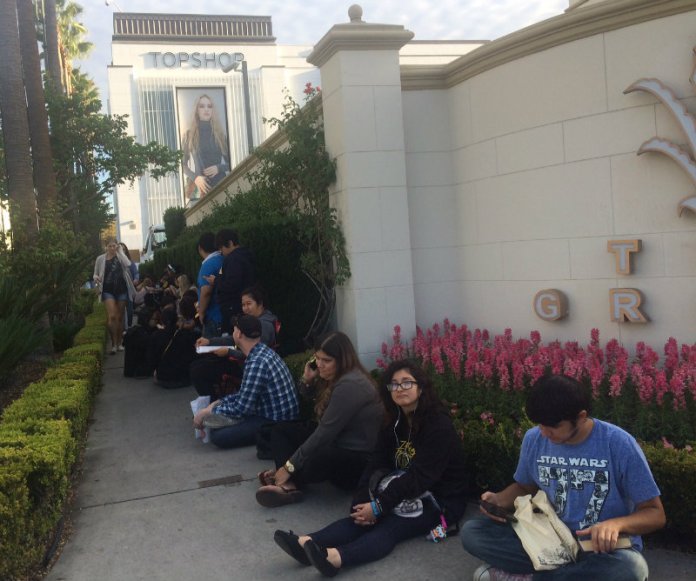 The line was so very painfully long even by 7:00a. I overheard a guard at The Grove saying there were around 400 people already by 9:00 a.m. Crazy!

The people after us. I apologize for this horrendous photo, but if you squint a little bit, you can see tiny ant people waiting all the way back there on 3rd.

Saying that I felt like a zombie when I finally got to work is an understatement. I was so tired I don’t even remember what happened while at my desk. Then we came back to B&N around 6:00 p.m. and waited again for the Q&A with Tracey Wigfield and Mindy.

Mindy KILLED it. Not only did she give advice on working hard for your success and earning the confidence to be a fucking boss, but she also touched on how women friendships are the best. And how to attract mentors. And how wedding cake face-smooshing is the worst. It was amazing. Then my yawning started.

My friend and I waited for another hour and a half or so while Mindy started signing books–chatting about what we were going to say to Mindy, how hungry we were, Yoga Puppies Calendar, how sleepy we were, etc. I was so excited and happy for my friend who was about to finally meet her hero, that I didn’t even think about how fucking amazing it was that I was about to come face-to-face with a woman who has worked her ass off to help pave the way for more Asians in the entertainment industry. She’s a showrunner for god’s sake. And after all the Barnes and Noble employees telling me to move forward, step up, step to the right, and other organized directions, I was finally here, the final tipping point, where I had to step onto the stage Mindy sat. I was one person away. I froze.

Things I had went over in my head for 3 hours that I planned on possibly saying:

“Ms. Kaling, I don’t mean to be fresh, but I fucking love your writing.”

“Does your mouth hurt? You don’t have to smile for my pic!”

What I actually said:

Mindy: [in really energetic voice] Hi! How are you?

Mel: [silence.] Um, you’re a great role model. To, well, obviously all of us. [I don’t even think I was looking at her when I was saying this. I then moved my hand in a Vanna-White swoop toward the rest of the people in the store.]

[snaps pic with her]

Mindy: It was nice meeting you!

Mel: [doesn’t answer, walks off in silence and never looks back]

Okay, I’m not 100% sure that was the exchange verbatim, but it was pretty damn close.

All in all I can say without a doubt that I have a higher respect for Mindy, and less respect for myself.

2 thoughts on “Dear Mindy Kaling: I Am So Sorry.”