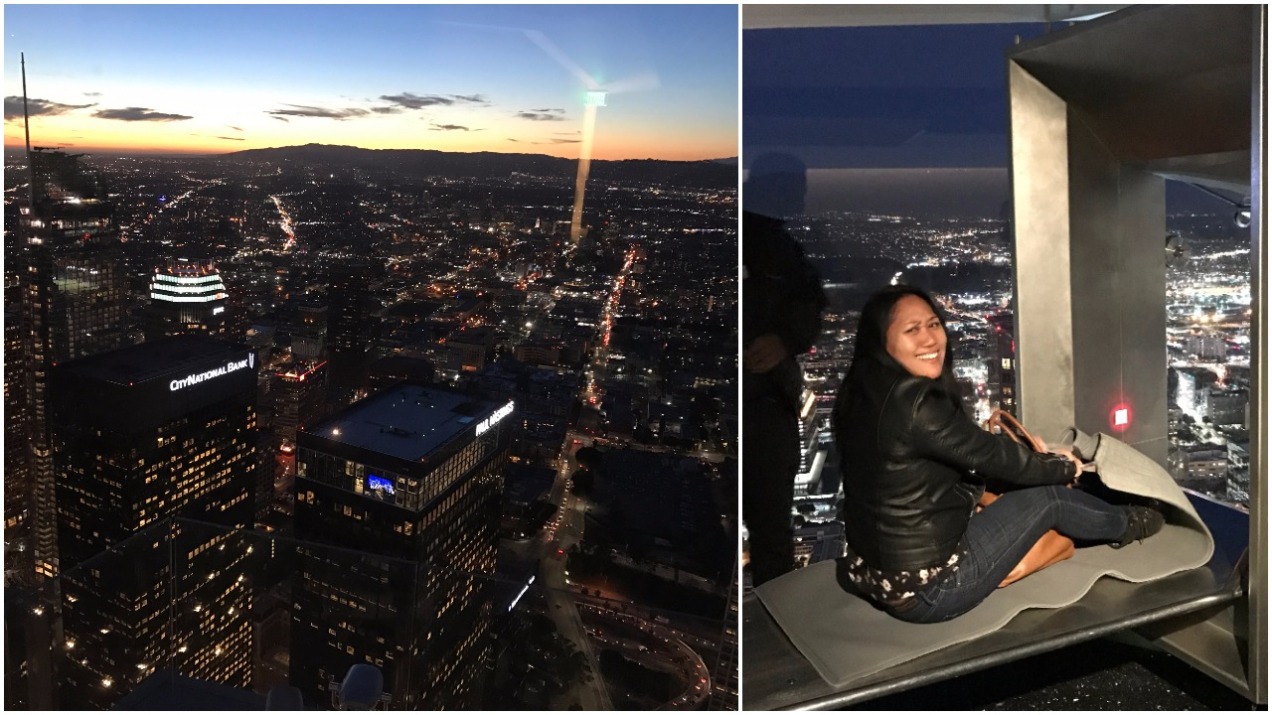 I’m not a daredevil. If anything, I’m a pee-myself-a-little-then-hesitate-and-try-to-make-up-an-excuse-to-never-do-it-like-ever sort of girl. I’m a refraindevil. So when I found myself scooching across a clear glass slide on a gray mat, 70 floors above the downtown Los Angeles’s bustling and hustling 5th and Flower intersection, I looked down and murmured a well-deserved “What in the fuck . . .”

To give some context around my 1,000 drop escapades: In March, one of my BFFs came into town on her Spring break. I wanted to take her on a tour of some of my favorite “hot spots” in DTLA—Clifton’s and The Broad—kind of like Ferris Bueller except everything was somewhat planned and there were no third wheels. Although I realized halfway into our Lyft ride that both of those places were closed on Monday afternoons, so we ate at Grand Central Market and ended up stumbling into the Bradbury Building, right across the street.

The Bradbury Building. FYI you can only go up one staircase. Also, I really need to watch Blade Runner.

Afterward, we whipped through The Last Book Store. “Whipped” here means slowly walk around the labyrinth of books and feeling guilty because I love reading Kindle books on my iPad and prefer it. (Hi, I’m an asshole!) We then strolled onward to a nearby Blue Bottle, where the barista explained to my friend what a traditional macchiato was, making her grin, given she lived in Italy for a like three years, speaks fluent Italian, and knows what the hell a traditional macchiato is.

A sneaky vault inside The Last Bookstore.

I remembered seeing a Facebook post on BuzzFeed, Daily Dot, or Elite Daily—one of those clickbait sites  (that get you EVERY TIME)—where they showed a video of a slide on top of some tall building in downtown Los Angeles. The post copy was something like “YOU WILL NEVER BELIEVE THIS GLASS SLIDE EXISTS! WE JEALLY!” I mentioned it to her and her immediate response was a beaming “Um, yes—we have to do this!” And my response to her response was a resounding, “Well, shit.”

My friend: So how bad is the Skyslide? We’re kind of nervous. [By “we” she meant me, since I was starting to get quieter and probably paler–I mean as pale as a tan, Filipino woman can get.]

Employee: Oh, I’m terrified of heights and I’ve been on it. If you have a fear of heights, you should do it! It’ll help you. Also, we have an event going on tonight so parts of the observation deck are off-limits. So we are letting our guests ride the Skyslide twice to make up for this inconvenience.

Me: [Thinking] This is the dumbest shit.

My friend bought me my ticket, nevertheless. As I walked through the metal detector and inside the all-mirrored elevator, I felt like a mishandled droid in some sci-fi movie about to take over the evil corporation because that’s my character arc!

We took the elevator up to what we thought was the 70th floor and checked out OUE Skyspace’s digital interactive level. It was mainly a hub for Los Angeles landmark trivia and a green-screened photo op. There was also this really cool wall that we stood in front of that created our silhouettes using pixels. We also saw down our elevator shaft and I nearly puked.

I started to worry when we walked to another set of elevators and were greeted with a woman asking us if we were ready to go to the top floor. “Oh what, wait?! There’s more?!” we said. She laughed and opened the elevator for us. Right. That’s funny.

We get up to the 70th floor, which was floor-to-ceiling glass and had the 360-degree observational deck. I immediately felt a bit dizzy and my palms started sweating like I was secretly doing a Tae-Bo tape in my living room. We walked around the enclosed observation deck and dusk was upon us. After pacing around for a few more minutes, we decided to see how other Skyslide people were fairing and watched as they lined up, sat down, and were swallowed by the glass with a scream. Oh god.

View from the 70th floor.

Another view from the 70th floor.

My friend went first because I, being me, would not. She sat on the gray mat and scooted toward the edge of the 36-foot long slide. Over her shoulder, I could see the twinkling city lights decorating the skyline, all sparkling and terrifying. She went over the edge and all I could hear her screaming was “THIS IS SO COOL!”

Me: So how are my legs supposed to be? Like, straight-ish?

Employee: Just straighten it out so you go down the slide. If you scrunch up your legs you could get stuck.

Me: Straight it is!

I decided to stare downward toward my slide’s destination—the outside observation deck on the floor down, and so I wouldn’t give my chance to panic upon realizing I was 1,000 feet high on a suspended slide. I scooted my tush forward and before I knew it, I was on the blue mat on the observation deck with a photographer blinding me with camera flashes. I guestimate I was on that slide for like 3 seconds. It was ridiculous. I literally and mentally felt high. “Yeah, so let’s do it again?” I said.

Before I went down the Skyslide a second time, I told myself to look past my fears and make an effort to really take in the city from this once-in-a-lifetime vantage point. I told myself to be like a spirited bird and reminisce on my time in Los Angeles with each and every gaze upon the uninterrupted towering edifices, mountains, and highways below that thrived with opportunity. But, before I had the chance to do all that, a whirl of black went past me and my butt was on the blue mat again on the observation deck.

Slid down a 70-story skyscraper last night with my B. Flip through ➡️and watch how terrifying it was + a green screen pic that makes no sense and that I love dearly. #dtla

PS this is what the Skyslide looks like from above. It was really, truly, fucking fun. I would not do it again.